What Kind of Angry Are You? 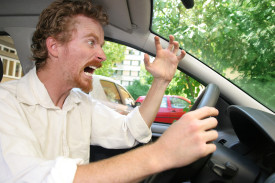 If you were asked to draw a picture of an angry person, what would you draw? Your figure would probably have clenched fists, a red face, maybe with its arms raised in the air, perhaps cartoon steam streams out of its ears. It’d be an accurate picture of one type of angry, but it’s just one in a deck full of images. If your figure with its red face is, let’s say, the queen of hearts, than the jack of spades would be a figure sitting in the back of the classroom with its arms crossed and a look of permanent contempt on its face, and the eight of clubs is sitting at home playing video games with a half-finished six pack by its desk.

Anger is anger whether it boils or simmers.

Some people show their anger by flying off the handling and yelling; others act cynical, negative, and irritable; and others may just seem withdrawn or depressed, lost in their world of television, books, or video games, or deadening their emotions with drugs or alcohol. So, what kind of angry are you?

The myriad anger styles in our anger deck can be sorted into two main piles: dumpers/venters and withholders/suppressors.

To figure out if you dump your anger, look at the following statements and see how many you agree with:

• I am easily angered.
• I am frequently drawn into situations that escalate into anger.
• I feel furious when I’m interrupted or blocked from a goal.
• I get angrier the longer I think about something that provoked me.
• I have a hard time letting go of a dispute.
• I often feel angry when criticized.
• I sometimes act angry because I know it’ll help me get my way.
• I enjoy the intense feelings of anger.
• I am angry most of the time.
• I get angry when people do or believe things I don’t agree with.
• When I am angry I raise my voice, slam my hand against a table, or throw things.
• I have used my anger to silence or control others.
• Being angry is just who I am.